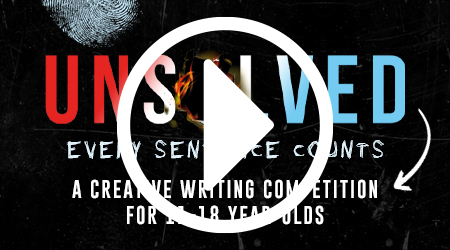 Enthral imaginations with creative writing as young writers create their own mini saga!

'Unsolved' invites your students to write a mini saga (a story told in just 100 words) inspired by the crime & mystery genre.

Will they fight for justice? Take on the role of detective in an enthralling whodunit? Or embark on an adventure as a fugitive?

Create a buzz in your English lessons as your students get excited to write their gripping tales...

There's a fun 1-minute video to introduce your students to the activity, plus a students' info guide and worksheet, and we've even got virtual classrooms covered with options such as the Word Doc version of the entry form and the Online Writing Portal - simply login or create your free teacher account at www.youngwritersusa.com/online/teachers.php

I love this very accessible program that inspires creative writing, thank you!

To make sure your entries are valid, please follow the rules listed below:

If you are unsure on any rules or have any queries, please don't hesitate to Contact Us.

The Young Writers' Award of Excellence

Every participating school receives a copy of the book their students are published in!

Our favorite 3 published writers each receive a trophy and $100!

(Winners are chosen from entries received in Oct-Nov 2021.)

A bookmark for every entrant and writers chosen for publication are awarded a certificate of merit.

Send your entries by uploading them:

Enter through our student writing portal:

Alternatively, you can email your entries to [email protected].

Send your entries, along with your school entry form, to:

Get FREE writing tips sent straight to your inbox!

To write a classic ‘whodunit’ your students are going to need:

• A victim
• A crime
• Suspects
• Someone to reveal the truth

Remember, your students don’t want to reveal too much too soon! Their job as a crime/mystery story writer is to keep the reader guessing until the end, so maybe a red herring too… That might sound like a lot to fit in to 100 words, but word choice, vocabulary and key info will ensure they can do this.

Next week’s tip looks at the hook, and introduces you and your students to “An Act Of Murder” – Young Writers’ mini saga that shows your students how to build up their story.

A narrative hook is a literary technique in the opening of a story that 'hooks' the reader's attention so they keep on reading. The hook is ideally the opening sentence.

Here are a few examples:
“Marley was dead, to begin with.” (A Christmas Carol – Charles Dickens)
“All children, except one, grow up.” (Peter Pan – JM Barrie)
“Mother died today.” (The Stranger – Albert Camus)

“An Act Of Murder” by Young Writers

The first line ‘She was killed on stage’ takes you straight to the action. We have a victim, a crime, and a location. No long description or set up, just straight in. So then, who killed her, how, and why?

Find out in next week’s tip as we explore writing the beginning of a mini saga.

After the narrative hook, your mini saga needs a strong beginning. With just 100 words there isn’t room for a big build up, so get straight to the point. Look at the story starters. Can you see how they dive into the action?

In this second line we find out how she was killed – stabbed by accident by the lead actor, because someone had swapped the prop knife! So we’ve got the introduction to the story all mapped out.

Notice how there isn’t much description – the reader will know what a theatre looks like, and we’ve given them the information that there is a man and a woman. They can fill in the details themselves – let them use their imaginations! So then… whodunit? Find out more next week when we explore characters.

“An Act Of Murder” already has the victim - an actress. We also have a suspect – the lead actor Alfie Jacks. Now we introduce a third character, the detective, who is also the narrator.

What characters do you plan to have in your mini saga? With only 100 words to write it, don’t go overboard on characters as you’ll struggle to give them a big enough role and they’ll eat up your word count! Use strong adjectives rather than long descriptive sentences.

I arrived promptly, the body still warm, and gathered the suspects. “Mr Jacks, it was you. The victim had recently rejected you, so you concocted this plan, hoping nobody would believe you’d commit murder in front of a live audience!” An officer arrived and cuffed him, ignoring his pleas of innocence.

The latest story instalment doesn’t show any other suspects – unfortunately we haven’t got enough words to add in more, but just having the detective ‘gather the suspects’ tells the reader to add in a few more people, even if they don’t actually appear in the text.

Then the narrator/detective reveals the killer – it was Alfie Jacks after all! A fourth character, the officer, is shown but only as a device to handcuff and arrest the murderer.

It is possible when using the first person narrator to show them making mistakes or having flaws – they are a character too remember. Alfie Jacks is still saying he’s innocent, so has our detective got this one wrong…?

A very important part of the story format – a rubbish ending really ruins a story.

What sort of ending are you aiming for?

• A twist
• A cliffhanger - don’t just stop halfway through a sentence at the end though. A cliffhanger still needs to give the reader an idea of what is about to happen next.
• Happily ever after
• Tragedy

I arrived promptly, the body still warm, and gathered the suspects. “Mr Jacks, it was you. The victim had recently rejected you, so you concocted this plan, hoping nobody would believe you’d commit murder in front of a live audience!” An officer arrived and cuffed him, ignoring his pleas of innocence.

I left, discarding the fake ID and moustache. He hadn’t even recognized his own understudy! Now he’d never act again, and I’d be the star!

Alfie Jacks is innocent. It was the understudy looking for glory!

This twist works because it’s plausible. The ‘detective’ arrived promptly remember – very promptly as the body was still warm. Almost as if he was already on the scene…

An understudy would have had the means to swap the knives, being backstage, and the means to plant evidence. And how did he know that she had rejected Alfie? At first you assume the ‘detective’ must have found out from the cast, but if he is a member of the cast, he’d already know that!

Most importantly, he has motive. Not necessarily to want the victim dead, but as a means to get his rival arrested so that he can be the star!

Did any of you guess what was going to happen?

Make a location the character!

Your students can write about the location rather than an actual crime/mystery or person. It’s a fun way to explore another writing viewpoint.

Get students thinking about using active or passive voice in their writing:

Passive Voice Example
The blackmail letter was posted by Jack.

Which will your students choose to write in?

Writing a story in 100 words is a challenge, so simplify the plot to keep your students on track...

1. A crime is committed or a mystery occurs

4. The culprit is revealed

Your students can focus in on one area, such as writing about a mystery, or perhaps be a detective pondering a tricky clue and working it out so the culprit is revealed in the last sentence.  You could focus on the culprit, perhaps an internal monologue of their thoughts, or their explanation for their crime.

Pop in your email and we'll send you handy links to all the contest downloads: