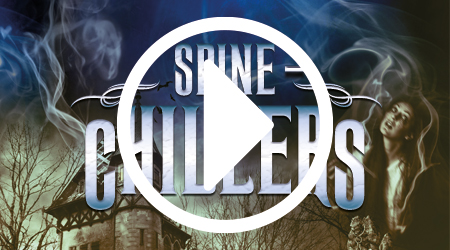 Spine-Chillers invites 11-18 year-olds to get creative this summer!

What lurks in your students' imaginations?

There is nothing better than reading a thrilling story, one that grips you so tightly and puts your senses on alert simply through the power of words.

Spine-Chillers is an amazing way to get your students writing using tension, suspense and atmosphere. Inspire your students to create their own original mini saga and become published writers.

Mini sagas can be funny, creepy, scary or strange. Your students can be inspired by Gothic fiction, ghost stories, campfire tales, the supernatural... it's time to write a hair-raising mini saga...

Use the video to introduce your students to the activity and there's a student info guide with some top tips to help them too!

It was so much fun!

To make sure your entries are valid, please follow the rules listed below:

If you are unsure on any rules or have any queries, please don't hesitate to Contact Us.

Every participating school receives a free copy of the book their students feature in!

Every entrant receives a bookmark and a certificate of merit is awarded for all young writers chosen for publication.

Send your entries by uploading them:

Enter through our student writing portal:

Alternatively, you can email your entries to [email protected].

Send your entries, along with your school entry form, to:

Get FREE writing tips sent straight to your inbox!

The age-old idea of good vs evil has inspired many a brilliant novel, but we love how 'The Strange Case of Dr Jekyll and Mr Hyde' battles this concept within one person.

There are lots of themes in the plot that make excellent story ideas:
• Do we all have good and bad in us? Jekyll and Hyde – two personas in one body, both battling for dominance.
• Science and the supernatural don’t usually mix, can students write their own original mini saga where these two cross paths again?
• The importance of reputation; showing people what you think they should see rather than the real you
• Communication – the characters in Jekyll and Hyde are often silent, unable to express themselves verbally

Students can take one of the themes and develop it into their own mini saga utilizing suspense, tension, and atmosphere to create an original piece of work.

Ask your students to write down their greatest fear and use this as a basis for their mini saga.

What would they feel and do if their greatest fear became reality? Ask them to make notes. As this is quite a personal exercise your students don’t have to share their work with the class!

This is a great way to explore fear and how it can inspire creative writing.

Having a character that shape-shifts into an animal is a fun idea, but well-used, so how can students make this original…

• Create a new species with a new purpose
• Use the animal to symbolize something else
• Write a tale with a twist; does the reader expect the character to be evil because of this ability or to act a certain way? Surprise them by proving their assumptions wrong!
• Write from the animal’s point of view rather than their human self
• Write a prologue or epilogue
• Use the power of suggestion; is the character an animal? Can they shape-shift? What do you want the reader to believe without you telling them?

The power of suggestion – can your students make the reader believe something without saying it? Can they persuade the reader to read between the lines, to make an assumption?

• Utilise the reader’s natural curiosity
• Use the weather to set the scene
• Use a simple noise, like creaking or a dripping tap, to create atmosphere
• Describe the character’s physical reaction to fear
• Describe what the character thinks is causing the noise …

Why not try extreme constrained writing!

Provide students with a spine-chilling scenario. This could be a scene from a book being studied, from an image, a headline, etc

Now ask your students to write their story plot in ten words! Ask them to bear in mind their mini saga requires tension, atmosphere, and suspense.

E.g. Woman is offered trial to prove her innocence in Salem.

They said that I had cast spells on the children, which made them say and do bewitched things. I did no such thing. I have better things to do than enchant wretched children. I begged the Governor, pleaded, protested my innocence as I was arrested. He said I’d get a trial, which would prove my innocence or condone my spirit to Hell. I had no chance of freedom again and he knew it. I wasn’t scared as I walked to the gallows. Just the opposite. It wasn’t a prayer I muttered under my breath as I dropped to my death…

Feedback tells us building a story up is easier than editing it down. We hope your students find this tip useful.

Pop in your email and we'll send you handy links to all the contest downloads: